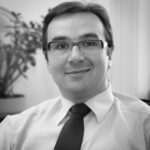 From 1998 to 2003, Tarik Kapić studied communication systems at the Swiss Federal Institute of Technology in Lausanne (EPFL). He furthered his experience in an exchange program at the Technical University of Catalonia in Barcelona (UPC) from 2000 to 2001 and, in 2002, specialized in multimedia communication at the Institute Eurécom in Sophia Antipolis, France.

He wrote his MSc thesis in the field of speech treatment within the scope of a longer internship with a Swiss telecom provider, and continued with his research activities at the Department of Computer Science of the Swiss Federal Institute of Technology in Zurich (ETHZ).

From 2002 to 2003, he attended the post-graduate program (Master of Advanced Studies) for protection of intellectual property at the ETHZ. He passed the European Qualifying Exam to act as a European Patent Attorney in 2009 before becoming himself a member of the Examination Committee II (in charge of paper C “opposition”). Ever since the entry into force of the Swiss Federal Act on Patent Attorneys in 2011, he has been also a registered Swiss Patent Attorney. Furthermore, Tarik is a member of the Examination Board in charge of the Swiss qualifying exam.

Thanks to his technological background, Tarik mainly deals with patents in the field of information and communication technologies, software and business methods. However, being the son of a watchmaker, he is also interested in mechanical watchmaking and has now gained broad experience in this field.