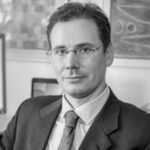 Benoît Gilligmann grew up in Strasbourg and studied engineering at the National Telecommuncations Institute (INT) in Paris, and then at Eurecom Institute in Sophia Antipolis, France, and Ecole Polytechnique Fédérale de Lausanne (EPFL), where he specialized in high-speed networks. After completing his engineering studies in 1999, he pursued a master’s degree in strategy & corporate finance at HEC. He then started working for the R&D Center of a telecom operator in Bern, as of 2001, focusing on research investigations on quality of service issues. Later he was involved in developing wireless remote network access and joined the CTO Office in 2003, where he was in charge of writing strategic reports (“trend scouting”) on emerging technologies to evaluate their business impact for telecom operators. He also worked as a consultant on various technological and economic evaluation projects in the field of business development and merger and acquisition projects.

Mentioned as an inventor on several patent applications and interested by intellectual property, he handled patent management between 2004 and 2006, before actually starting as a patent engineer, first in a private IP law firm in Neuchâtel, and then within a leading Swiss watchmaking group from 2008, working both in the field of mechanical watchmaking (complications, regulating organs, habillage, etc.) and electronics, namely in timekeeping or other aspects in connection with information technologies.

Within the scope of his professional training, he followed the accelerated training at CEIPI (Centre d’Etudes Internationales de Propriété Intellectuelle) in 2009, and passed the qualifications exam as a European patent attorney (EQE) in 2011. One of the first people to take and pass the exam to be a Swiss Patent Attorney in 2013, he also passed the French qualification exam (EQF) for French Patent Attorneys in 2014, and became a member of the EQE exam committee III (in charge of paper D, “juridical part”).

Thanks to his training as an engineer in communication systems, Benoît is mainly active in the field of information and communication technologies, software and business methods.